Having just played 2 huge sets at Reading & Leeds this weekend, there was no time to stop for SWMRS as they came down to Southampton to play a sold out gig at intimate venue The Joiners.

Having just played 2 huge sets at Reading & Leeds this weekend, there was no time to stop for SWMRS as they came down to Southampton to play a sold out gig at intimate venue The Joiners.

Support for the gig came from indie pop singer Jerry Williams, who has just recently opened for SWMRS on the European leg of their tour.

Williams delivers her music well, her confidence shining through as she dances along to her powerful vocals and sweet melodies, with personal moments being held with the crowd as she speaks about the deeper meanings behind her songs, connecting with those watching. The set is a mixture of acoustic songs and ones requiring her supporting band, a perfect blend to introduce the crowd to her. Williams knows how to put on a gig, and her support slot with SWMRS is a promising sign for the future.

SWMRS come onstage to a huge welcome soon after, instantly opening with ‘Drive North’. From the get-go the crowd are screaming along to every word, the room alive with love and passion for the band that have captured their hearts with their punk rock sound and adoration for the fans.

Throughout the set, fans are regularly stage diving, whilst band member Cole Becker bounces around the stage a lot, greeting the crowd below and dancing with them whilst they eagerly shout the lyrics back at him. At one point, he leaps backwards into the crowd with his guitar, the crowd catching him and keeping him up whilst he shreds away, and it is impressive to watch.

‘Miley’ sees the crowd open a pit to which Becker exclaims “Oh you already know what’s going on”, seemingly shocked by the enthusiasm of the crowd. He then goes on the welcome the SWMRS fans who are new to their gigs, and welcomes back those who’ve experienced it before and beat him to opening the pit during that song.

The band soon introduce new single ‘Berkeley’s On Fire’ and mention how they wanted to try something a bit different when initially releasing it but weren’t sure of how fans would react to it. However, that seems to be forgotten as they smash through the song with it proving to be a hit with the crowd, much to the band’s delight.

Towards the end of the fiery set, the band take a quick break for Becker to voice his opinion of how “rock ‘n’ roll won’t solve your problems”, which then leads into a quick talk about the current state of politics, briefly touching on subjects such as Brexit and Trump. A chant popular at festivals last year, “Oh Jeremy Corbyn”, is then revived for a few seconds to end the talk, the crowd joining in with it. 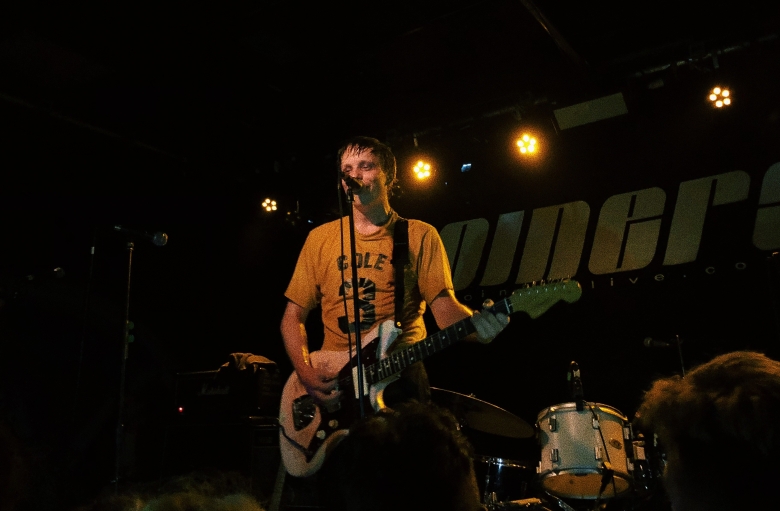 SWMRS then leave the stage and return to a rapturous praise as they start begin the classic encore to bring the gig to an end, one which sees the crowd snap up their last opportunity to go crazy before the set ends. Closer ‘Palm Trees’ is the perfect song to end such a fulfilling set, summarising the whole thing into one perfect moment. The crowd is swept away, moshing to their heart’s content and enjoying the last few moments left of this experience.

On the whole, SWMRS’ gig at The Joiners is one to remember. Full of unforgettable moments and a chaotic crowd with a strong setlist to support it, you can be assured it was an impressive one. The band even managed to fit in a cover of ‘Come on Eileen’, introducing it as a new, unreleased song to get the crowd excited, some point throughout the show. Coming straight after their sets at Reading & Leeds too, the band shows no sign of stopping and it seems as if nothing can get in the way of them putting on such great shows.

This site uses Akismet to reduce spam. Learn how your comment data is processed.